Thanks to Los Angeles accident lawyer David Azizi for providing the legal knowledge and expertise when it comes to personal injury, criminal defense and other types of law.

This is a live commentary of Breaking Bad Season 2, Episode 8: Better Call Saul. This is the first episode in which Bob Odenkirk portrays the fictional lawyer character Saul Goodman.

The show starts with Badger sitting on a bench with an advertisement for “Better Call Saul” Saul Goodman Attorney at Law. Badger is immediately worried about cop vans staking out the area.

Badger gets the “buyer” to lift his shirt to prove he is not a cop. He then tells the buyer to punch another guy in the face. Badger is torn as to whether or not to sell to the buyer. Badger gives in and says he is selling for $175 for 1/10th.

The money is exchanged, Badger gives him the drugs and is immediately arrested. The vans that Badger was actually making fun of truly were the police staking out the area. Badger going to jail is a huge issue for Walt and Jesse.

The famous “Better Call Caul” TV commercial comes on while Jesse is laying on the floor with no bed. Per the usual, Jesse wants to light one up. Jane (Krysten Ritter) is not interested as she is 18 months recovering.

Walter and Skyler are discussing Ted Beneke and work. Skyler is going in on a Saturday and we are learning that Skyler and Ted had something in the past or they could have something moving forward. Skyler gets a message from Marie but Walt is the only one home to answer.

Marie invites Walt over and explains there was a very bad accident that relates to Hank. Walter goes into Hank’s bedroom to discuss the issue. Walter is slowly trying to pull information out of Hank. He is very strategic about the way he moves the conversation and asks questions. Walt asks Hank if he is home for good. Hank states it is still to be determined. Of course, Walt wants Hank to open up to him. This conversation has so much foreshadowing it is almost scary.

“Fear is the worst of it, that’s the real enemy. So, get up. Get out in the real world. And you kick that bastard as hard as you can right in the teeth!” Classic Walter White.

Jesse and Walter are counting cash with a money counting machine. They count out $10,000 cash multiple times. Walter sees an earring on the floor and asks Jesse if it is his. This is foreshadowing of Walter not liking the thought of a girlfriend or Jane. Badger is behind on $2000 of his money. While on the flip phone Jesse learns that Badger has been arrested. Walter White is not happy.

Hank is back at the office but is having trouble controlling his temperature and health. Gomez (Gomie) and Hank discuss the blue meth. They take a trip to see if they can find the seller.

Badger is being questioned by the cop (DJ Qualls) who is the guy that played in the teen movies Road Trip and The New Guy years ago. We then get to meet Saul Goodman for the first time. He busts in and says, “Ehhh, what are you doing detective? What are you doing talking to my client without me present?” Saul immediately takes control. “Look at you, vocal chords a twitter.”

“You are going to get me off, right?”
“What do I look like, your high school girlfriend? Five fingers, no waiting? It’s a joke, Brandon! Lighten up!”

I will give you the best criminal defense that money can buy. Saul is walking out with the bluetooth in his ear. Hank makes fun of Saul’s commercials. Saul comes back and makes fun of Hank’s mother. 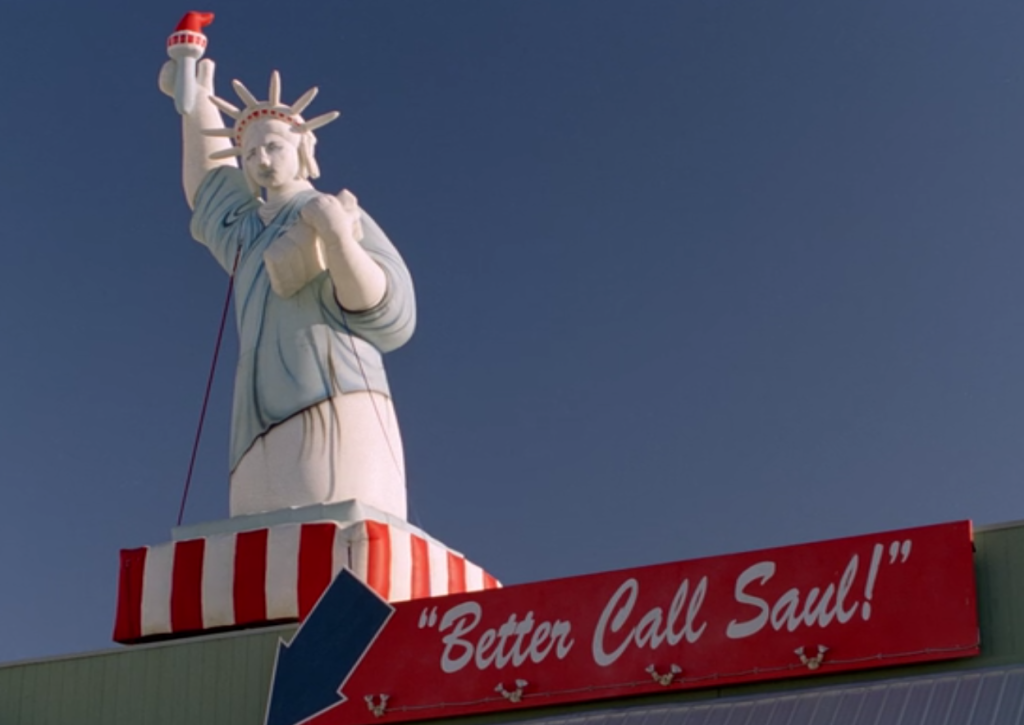 Upon walking into Saul Goodman’s office there is a crying baby and plenty of sketchy “clients”.  Walter is wearing a hat, sunglasses and goes by Mr. Mayhew. Saul says, “Should I call the FBI and tell them I found DB Cooper?”

Saul takes a check from Walter for the first time. Here is the handshake: 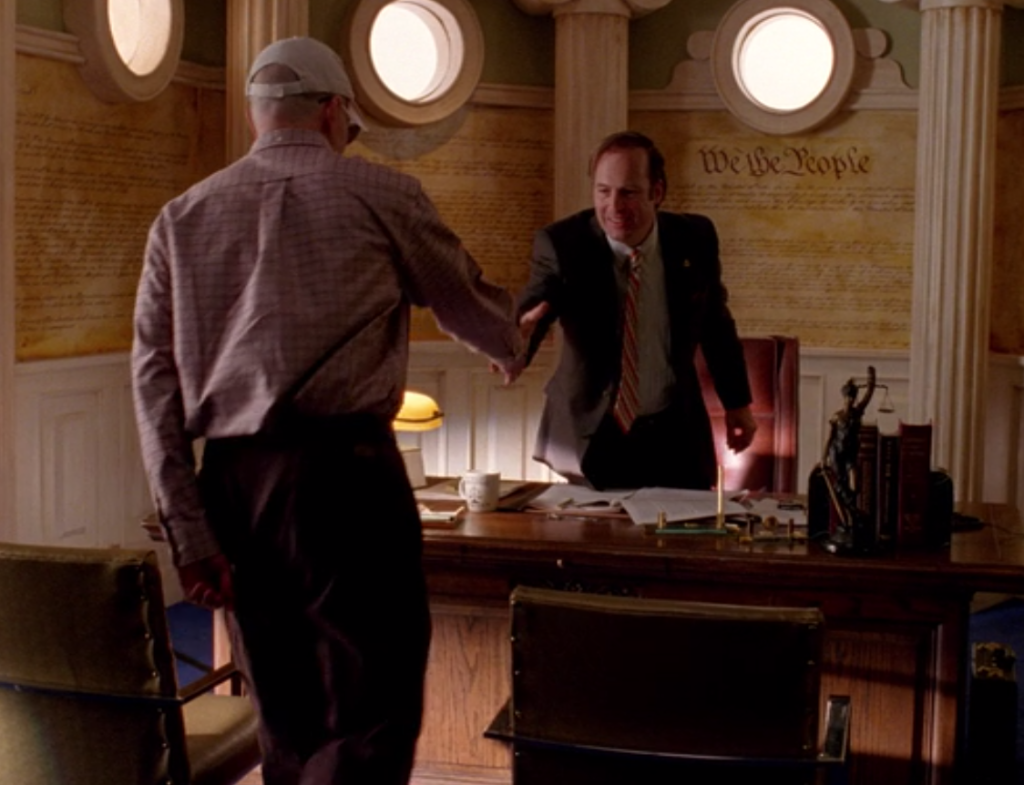 “My real name is McGill, the Jew thing I just do for the homeboys.” Walt learns the DEA is involved and gets extremely concerned. Saul Goodman explains the DEA is after Heisenberg. Walter wants to “review the options.” He then offers Saul $10,000 in cash to not talk to the DEA. Saul Goodman would not take the bribe, Walter tells Jesse.

They wait until Saul is leaving the office that night. He is getting in his car with the license plate “LawyrUp” when Jesse and Walter kidnap him. They hold him at gun point in the middle of the desert. Saul Goodman takes the offer which is to give Badger the best legal representation but there will be no talking to the DEA.

Saul asks, “Why don’t you just kill Badger?” Jesse and Walter are not willing to kill Badger. “He is going to sing like Celine Dion no matter what you do to me.” Saul recognizes Mr. Mayhew’s cough. Saul wants $1 in his pocket from both Jesse and Walter to make attorney privileges official. “You are both officially represented by Saul Goodman and Associates. Your secrets are safe with me under threat of disbarment.”

Take the ski mask off. I feel like I am talking to weather underground here.

Saul and Badger are with Hank and Gomez. Badger outs Heisenberg. He says he is like 50 or 70 years old, average/medium height. No hair.

We are left wondering what Saul’s plan is. We quickly learn that Saul Goodman already has someone that will be willing to go to prison. It is going to cost $80,000 and one pound of the blue meth. Saul will represent this guy. Saul gets $50,000 and $30,000 goes to the guy that will go to prison. 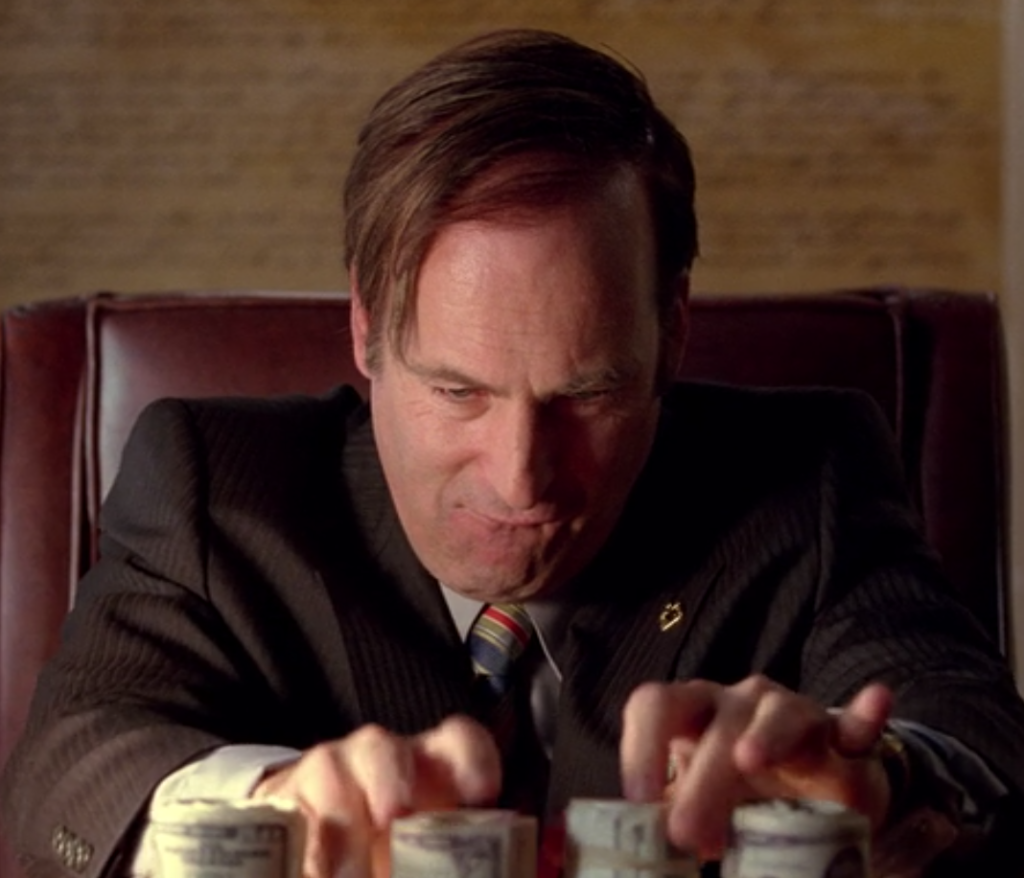 The Better Call Saul bench is back. Badger is sitting it in again, this time with a bag. The DEA agents are scouting out the scene. They are waiting for “Jimmy” who wants is going to take the dive. Some other bald headed dude shoes up and sits next to Badger. The real Jimmy sits down on another bench which is ruining the entire plan.

Walter tells Jesse to get out and go stop Badger. He drives up to Hank and blocks the way. Walter plays if off like he didn’t know what was going on. Jesse tells Badger it’s the wrong guy and he needs to go to the other bench. All of this is done just in time for the DEA agents to see Badger doing the deal with the “Jimmy” character that is going to take the fall. Per the usual, Walter and Jesse just slide by and avoid disaster.

The police and DEA agents think they caught the real Heisenberg. Little do they know.

Jesse gets home to his apartment and there is a brand new mattress. Jane knocks on the door and tells Jesse she let the delivery guys put the mattress in his place.

Walter is grading Chemistry papers at school when Saul Goodman comes by. “I was terrible at Chemistry, I was more of a Humanities guy.” Saul explains it should be much harder to find Walter. Saul wants to help Walter by being a small and silent part of the product. “If you want to make more money and keep the money you make…Better Call Saul!”