Dear Fox: Why the Television Network Should Have Kept ‘The Mindy Project’

I get it. I really do. The goal is to get good ratings and The Mindy Project just didn’t have them. Even I have to admit that the show, which has developed a bit of a cult following, struggled to find its footing in the first season. According to the Hollywood Reporter, the 2014-2015 season decreased in viewership from the previous year, averaging a 1.4 rating in the 18-49 demographic and 2.9 million viewers. The pacing was off, the episodes seemed out of order, and many of the jokes fell a little flat. The cast seemed to be a revolving door of actors and actresses, new characters constantly appearing and disappearing (Does anyone else remember Mindy’s best friend or the two young receptionists, or did I just dream those up?)

But then the show picked up a little steam. The jokes began landing and became more and more consistent. The cast settled into a groove and characters formed full and interesting identities. The Mindy Project went from the little show you watched because you loved Kelly Kapoor on The Office to the show you watched because Mindy Lahiri made you laugh so hard your sides hurt.

My friend Kelsey Weekman wrote an article earlier this evening (can you still call it “this evening” if you’re up past midnight typing this because you’re too angry/upset to sleep?) detailing all the reasons that the show should be picked up by Hulu. I agree 100% with everything she says. You should check it out, Fox.

The real reason, Fox, that you should have kept The Mindy Project (and the reason I hope that the show is picked up by Hulu) is representation.

Let’s star with our heroine. Mindy Kaling is Indian-American. One of the only ones on television (though more and more have found roles recently). Many have argued that it was Kaling’s scene-stealing performance as Kelly Kapoor on The Office that really began opening doors for other Indian actors and actresses. Another thing that sets Kaling apart from so many other celebrities is that she’s not a size two. In fact, she’s been very open about her size and her inability to conform to standard beauty conventions, even poking fun of her weight on her show. And as Kelsey pointed out in her blog post, Lahiri is a pioneer of the female antihero. I think we oftentimes expect that if we are to like our female characters, then they have to be *practically perfect in every way.* That’s boring. Because who’s perfect? Who isn’t selfish or hasn’t said something shallow and dumb? We can see ourselves in Mindy, because even at her wackiest, she’s more real to us than most of the other women on television. We look at her and we see a powerful woman of color creating her own rules in the entertainment industry and absolutely KILLING THE GAME. 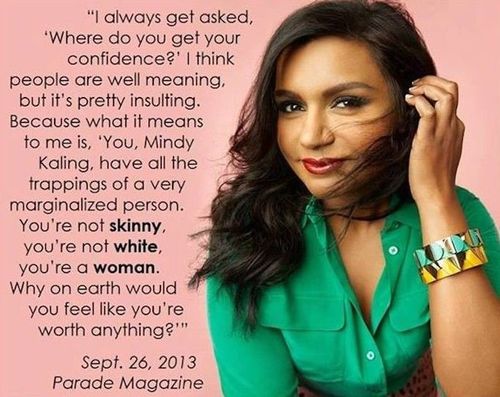 I also love how Mindy is a doctor. It would have been so easy for the show to make her a writer at a trendy fashion magazine or the owner of a bakery (because those are apparently the only two jobs women can have), but instead they made her an OB/GYN (an homage to Kaling’s late mother, Dr. Swati Chokalingam). Though Mindy can be frivolous and lacking in common sense at times, her competency as a doctor is never called into question. In fact, one of the major storylines this season was her deciding to leave New York City to pursue a medical fellowship at Stanford, risking her relationship with her boyfriend, Danny. How many shows do you see a young professional woman choosing to put her career first? VERY FEW. And if they do, they’re usually hardasses or deemed “the bitch.” But Mindy doesn’t allow herself to fall into those character tropes, and thank goodness for that. She remains career oriented without sacrificing her femininity, which for some unknown reason, is almost unheard of in film and television.

What’s more, she’s pregnant! You cut her off when she was pregnant, Fox! Do you know how terrible of a mistake you’ve made?? If The Mindy Project has proven anything, it’s that it can take elements that would usually signify “jumping the shark” (ie the two main characters getting together, pregnancy) and make them work. AND YOU’VE DEPRIVED US OF THAT, FOX. The show also did an amazing job of showing Mindy’s struggle with dealing with her baby-bod without it seeming cheap. In fact, The Mindy Project has handled body image SPECTACULARLY. Mindy is a beautiful woman confidant in her own skin, and the show isn’t afraid to explore that. Sure, she falters sometimes. We all do. But she remains in large part in love with herself, and that’s so important in a society that looks to undermine young women or force them to accept a preconceived notion of what beauty really is.

Like I said before, it all comes down to representation. Being able to see someone that you identify with on screen is so powerful. I’ve had people argue with me that this isn’t true, that you don’t need to see someone who looks like you on television or film to know that you’re also capable of achieving great things. And for some, maybe they don’t. But you will never convince me that somewhere out there, a young Indian girl didn’t see Mindy Kaling with her own show and become excited. Or that a young transgender teen didn’t flip on the television and see Laverne Cox and think, look how beautiful and successful she is. I can have that.

I look at Mindy Kaling and she inspires me. As cheesy as it sounds, knowing that there are women like her out there in the world gives me the strength and determination to become successful. I see her — smart, hilarious, beautiful and confident — and I think, yeah. Maybe my dreams aren’t so crazy. Maybe I can do this too. Not quite like Harley Quinn of Gotham, Season 3 or 4.

Fox, I know that it’s a done deal. You’ve given The Mindy Project the ax. And that makes me sad. I hope that the show can find a home somewhere else, because it certainly deserves this. Perhaps this post wasn’t to convince you to keep the show. I know it’s too late for that. Instead, let this be a plea for you (and other channels and shows) to represent all different types of people. To create complex female characters. To give talented young female writers a platform from which they can share their gift.

To give ever person a voice.