Over the last few years there have been a number of popular TV shows that are related to characters who make their living in the courtroom. Who would have ever thought that a show about a drug dealing teacher and student would spin off a show that explains the life and times of their lawyer. Better Call Saul has been a huge hit and will likely get even more popular in a similar fashion to Breaking Bad. In recent history, Breaking Bad is the only show that increased viewers all the way into the finale. The chart below is mind boggling: 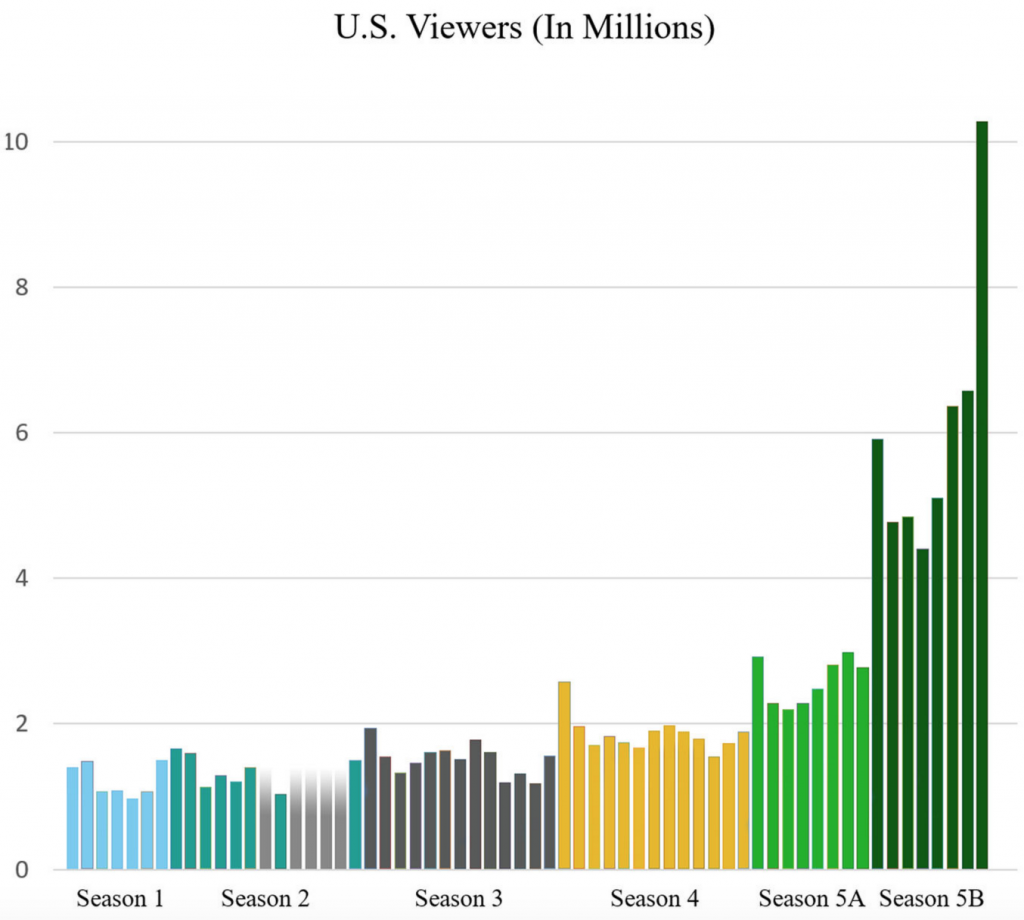 Wikipedia is the source.

Better Call Saul started off stronger than Breaking Bad because of the hype but settled into a stable audience throughout the middle of the first season. Much like Breaking Bad, Saul Goodman saw his viewership increase as the season finale neared.

Better Call Saul will likely not replicate the success of Breaking Bad but it is interesting to see a popular legal professional get his due on TV. If you have not watch the first season it is available on Netflix. Once you get caught up you can start watching Season 2 on AMC now. Note that the season of a popular TV show will not be available on Netflix until right before the next season is set to premiere on their regular TV station.

How to Get Away with Murder is another popular TV show that has caught the attention of millennials. This show is about a group of ambitious law school students and their brilliant professor. We won’t spoil it for you as there are many plot twists. If you know anyone in law school or planning on going in to law school How to Get Away with Murder is likely on their playlist. This show airs on ABC and has had a loyal following since the premiere episode. You can watch the first season on Netflix right now. Whether you plan on going into criminal defense or personal injury trial law, this is a great series to watch.

Two shows that have caught the attention of the entire American pubic are Making a Murderer and The People vs OJ Simpson. Both of these shows go into great details about the trial of being accused of murder. Anyone that lived in the 1990’s can clearly remember the OJ Simpson trial that was broadcast on live TV. In fact, some would argue this was the true beginning of cable TV. When I was young I can remember the white Bronco scene, the glove and Johnny Cochran. Oh, the good old days.

A more recent phenomenon is Making a Murderer. This was a documentary that caught fire on Netflix over the Christmas holiday. With so many students and business professionals taking time off it was a great way to enjoy some quality entertainment. Most people that watched the first episode of this Netflix original series could not stop watching and ended up binge watching all 10 episodes.

There were moments in the show that were truly remarkable. We quickly learned the difference in a great criminal defense lawyer and a very bad one. We also learned that one should never confess to a crime they did not commit. It was astonishing to see some of the ways in which the interrogators treated the nephew of the uncle that was accused of murder.

We wont’ spoil the whole documentary for you as it is great TV to watch. Take the 10 hours and binge watch it the next opportunity you get. You will thank me when you do.

Over the next few years we are going to see more and more legal TV shows and documentaries. The American public is enthralled with these crime stories. The TV Channel Investigation Discovery is sure to get more popular over time as it has stories similar to the Serial Podcast and the Making a Murderer TV documentary on Netflix.

What are your favorite “lawyer” TV shows? Are there particular legal podcasts that have caught your interest? We would love to know in the comments below.