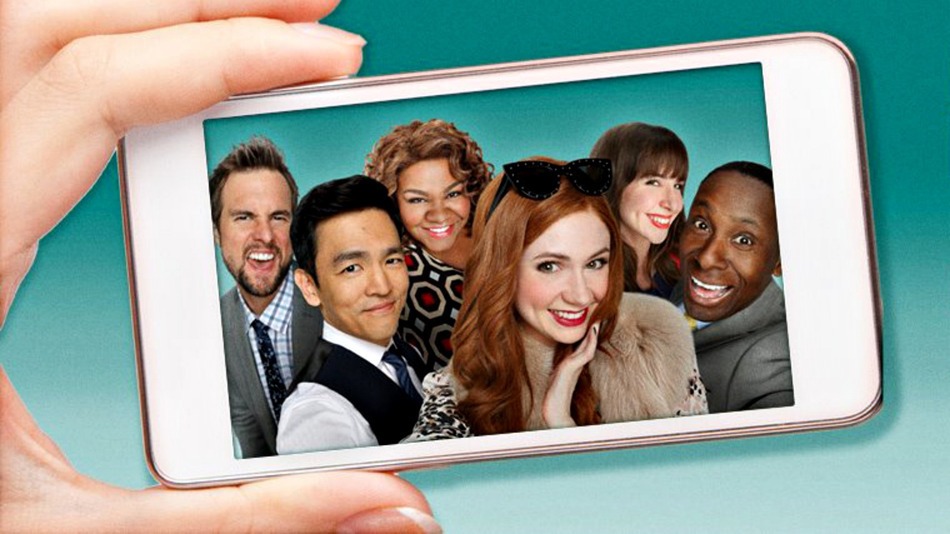 Where do I even begin?

When I first heard that there was a show in development that was based off of Pygmalion (or My Fair Lady, to us less cultured individuals), I was excited. After all, I’m one of many who believe that Audrey Hepburn’s performance in My Fair Lady is a true cinematic treasure. That accent! That dress! Everything about the movie is absolutely golden. While I wasn’t sure that a television show could quite capture the magic that My Fair Lady had, I was optimistic, especially after seeing that Karen Gillan and John Cho had signed on as the leads. And so I sat back, relaxed, and turned on the pilot.

And do you know what? Selfie took a beloved and classic story and threw up all over it.

Selfie is about a young woman, Eliza Dooley (Karen Gillan), who is “instafamous” — though I can’t understand why. She’s pretty, sure, but she doesn’t seem to have any excess of wealth, great sense of humor, or career that would explain the level of celebrity that she has apparently reached (236,000 Instagram followers, to be exact). The only real explanation for all of this is that  she was once “butt ugly” and decided to emulate a more popular girl at her middle school and PRESTO. Eliza went from being voted “Most Butt” in seventh grade (I think that was an attempt at a joke, but I’m really not sure) to being Instafamous beyond her wildest dreams.

So anyway, she’s popular, yadda yadda yadda. Her co-workers don’t really like her because she’s a snob, even though she’s the most profitable sales rep in her company (!). Because we have to show that she’s talented to balance out the fact that the writers have written her to be the most insufferable and idiotic character on television. Well, that is until we meet Henry. But I digress.

Eliza and her co-workers are all on a plane flying to…I actually have no idea. They might have said. But the first few minutes were so terrible I must have blacked out. Anyway, Eliza walks up to some guy that I guess is her boyfriend? Never really explained. He just sort of appears. And surprise, surprise! He’s married! So what does Eliza do? Throw up into doggie bags.

Do you see where this is going?

She begins walking down the aisle of the plane and….wait for it…the doggie bags break and she spills vomit everywhere. Again, was this some sort of attempt at a joke? (I found myself asking that question a lot during this episode).

Naturally, everyone on the plane starts taking pictures, because apparently that’s the immediate response that everyone has when a distressed woman is publicly humiliated.

And guess what? Because of this, she’s no longer famous! Because she threw up on a plane. And she decides that she needs help because (revelation of all revelations) she realizes that having a ton of friends online doesn’t mean you have friends in real life! Wow! How original and inspiring! #groundbreaking

I can’t even make this stuff up.

We’re then introduced to Henry Higgs (John Cho), and we find that he is the most self-righteous and pompous ass that has ever had the misfortune to find his way onto network television. Side note, why have they awkwardly shortened the character’s last names? Is this some attempt at being hip? Was Doolittle and Higgins too much for them? If the writers were going to defile their last names, they might as well have just changed them all together.

Henry hates everyone who uses social media (especially Eliza) and is BEYOND RUDE to her from the get go. And listen, I get it. She’s shallow and annoying. But if the writer’s think they’re being funny by having Henry verbally assault Eliza (Your clothes are too sleazy! Too much makeup! Too shallow! There’s no help for you! I am the greatest and most amazing person of all and everyone else is trash! …Or something like that), THEY ARE DEAD WRONG.

Let’s take a break and look at some of the dialogue from the pilot:

WHAT DOES THIS EVEN MEAN???????????????????? Is this what constitutes a joke nowadays? If I’d have known that, I’d be working in network television right now, along with my 3-year-old cousin and a group of monkeys.

I’m not going to go through the whole episode because honestly, it was just too painful. Basically, Henry rebrands a dangerous nasal spray and it becomes popular so OBVIOUSLY he can rebrand Eliza as well. Eliza unironically uses a hashtag in conversation (because she’s shallow! And really into technology!!!!). Henry tells her that he has NO ROMANTIC INTEREST IN HER (which roughly translate to “we will have sex and/or makeout within the next five to ten episodes), then he teaches her how to talk to the receptionist because apparently, even though they talk every day, Eliza doesn’t know her name or anything about her (BECAUSE SHE’S SHALLOW! GET IT????????). And then Henry invites her to a wedding as his date (because he’s mean and can’t get a date of his own) and she interrupts it by playing some iPhone app (but it’s because she’s actually emotional, okay?). She and Henry fight, he says he won’t help her, she’s able to talk to the receptionist and realizes that Henry is helping her and she goes to his house and they flirt in the rain and then he agrees to help her.

In the end, the episode was rushed, the acting was bad, and Karen’s attempt at an American accent is a complete disaster.

I honestly can’t even believe the same man that played Hikaru Sulu in the new Star Trek movies and the women from Doctor Who and Guardians of the Galaxy actually read the script and agreed to this. Where they drugged? Are they being blackmailed? IS THIS A CRY FOR HELP, JOHN AND KAREN??

I know that ABC was trying to bring a classic into the modern age, but oh how it has failed. And failing is putting it mildly. This baby crashed and burned.

I honestly can’t even imagine what The Mysteries of Laura (starring Debra Messing) must be like if Selfie didn’t beat it for worst new show this season.

The pilot of Selfie premiered online on August 20th, and I honestly can’t imagine what would have possessed ABC to preview the show before the September 30th network premiere. Are they trying to scare off viewers? Maybe they realized how awful it is and are trying to kill it off quickly. That’s really the only explanation I can think of.

So go ahead, watch the premiere online or catch it when it premieres Tuesday, September 30th at 8/7c on ABC if you’re feeling brave.